The Big Sur International Marathon is a bucket-list road race on what is picturesquely billed as the ‘ragged edge of the western world’. It’s a point to point race along California’s Pacific Highway 1 from Big Sur to Carmel and is arguably the most scenic road race in North America.

The highway is the life blood of the residents and is thus closed for only 6 hours on race day, (a sweeper bus picks up those who don’t maintain the pace). There is no access for supporters so that leaves only remotely spread locals along the route. The natural beauty and remote feel of Big Sur is the polar opposite of New York’s urban grandness and record crowds.

I won a lottery team entry for 2016 with my old friend Tanja. I trained the majority of that cycle running what felt like endless loops around Central Park’s Harlem Hill before developing a knee injury. Two weeks before race day an ultrasound confirmed a torn meniscus. My Big Sur marathon was over before it started. I was thus content to drive the route, take in the views and support Tanja. This concluded my first back-to-back marathon training cycles and, frustratingly, two consecutive meniscus tears. “Maybe I’m not built for this”, I thought.

A year on, (with a second and injury-free NYC marathon behind me), I completed the 2017 Big Sur International Marathon. 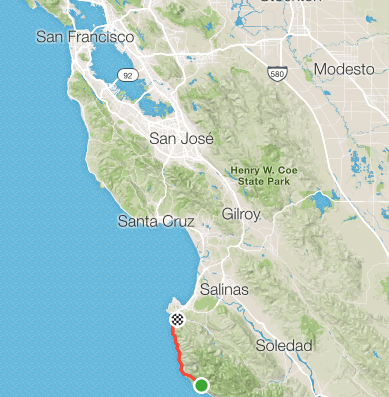 That twelve months was hard for the residents of Big Sur. First, wildfires ravaged the area (Autumn, 2016). It was the costliest fire containment exercise in US history totalling over $200 million. Homes and lives were lost. Then as 2017 started so did the rain. Unprecedented rainfall triggered floods and mudslides. At the time of the race Highway 1 was still closed and inaccessible at 4 separate points south of the course. The course itself had one short stretch where the seaward lane of the highway had entirely vanished. Everyone had reason to celebrate this 32nd running of the race.

An early Sunday alarm (03:30) had us boarding the bus with coffee in hand for the 04:15 drive south from Monterey along the full length of the course. Due to the highway closures busses dropped us a half mile from the start at the Ranger station. It was still dark as we disembarked. A strong pine scent from forest floor hit us.

At 06:45 a soprano sang the national anthem and the first of 3 waves of runners started out just five minutes apart.

The first 4 miles the through redwood forest are downhill. Going out to fast could be costly. If you’re struggling to find a comfortable part of the road to run on you’re not alone. There isn’t one. Highway 1 has a crazy camber to it with very few points where it’s actually level. I swear that in places there’s a three foot height difference between the edges of the road. Get used to it. My best tip is to stick to the left. If nothing else at least you commit and free your mind to focus on the distance and your form. If you don’t you’ll rack up unnecessary extra distance in a side to side search for a level patch of tarmac.

Flattening out at miles 5 and 6 you enter pasture land. Cattle graze in the meadows to the left and the ocean views greet you. The first rolling hills tease what is to come. I was apparently oblivious to the breaching whales that others stopped to photograph. 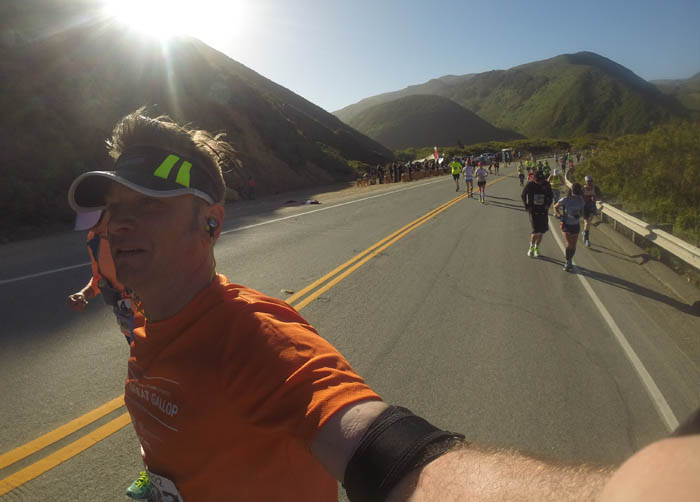 At mile 10 the single biggest climb on the course begins. Two miles of winding, uphill slog climbing 500 feet. Keep your eye on your watch distance; don’t let the series of false summits fool you. This is Hurricane Point and the highlight of the elevation map. As the name suggests it can be windy here. Last year, for example, it literally blew runners off their feet. Today was thankfully calm. 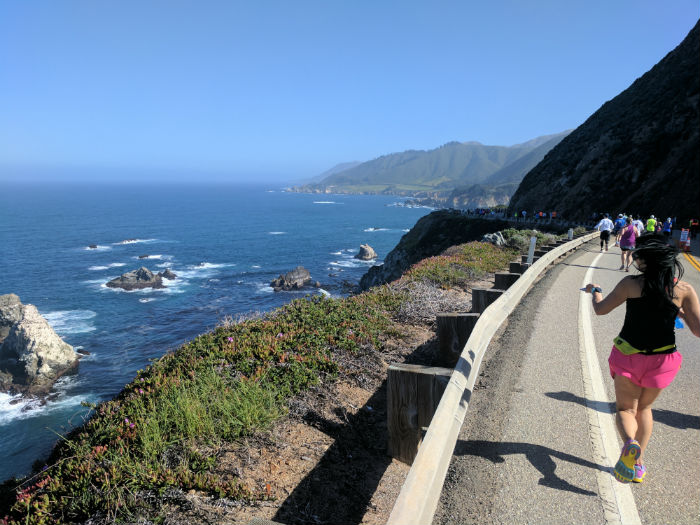 Mile 13 is a beauty, if you like downhills, and takes you over the stunning Bixby Bridge. The first half of the race is behind you, and the second is harder. Look in detail at the elevation maps and ignore Hurricane Point. You’ll see an agonising second half of long rolling hills. It’s been easy going so far.

Quoting from the 2017 BSIM program,

“…most people run into trouble at the same part of the course – miles 21-23 through Carmel Highlands… Your body is worn down and your mind isn’t yet convinced that you’ll make it to the finish. And then you hit the Highlands, where the steepest climbs of all await you… The Highlands are the place where inner demons emerge and your body cries out. Sometimes if feels like you can barely keep your legs moving – and more often, you wonder why you’re even bothering to try.”

On the positive side you’ve already invested so much there’s no way you’re going to quit now and it’s downhill to the finish!

Dotted along the course are several local bands playing excellent music. In NYC bands help the crowds generate a buzz. At Big Sur they’re there just for the runners. Other course highlights include:

For the first time this year the water stations featured a BYOB (bring your own bottle) refill. That really just means water stations had constantly filled jugs of water to enable a speedy refill of your own hand-held water bottle. It reduces the environmental impact of paper cups and makes for a speedier water stop. It’s a great idea. 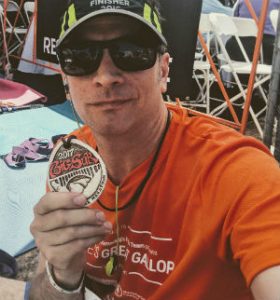 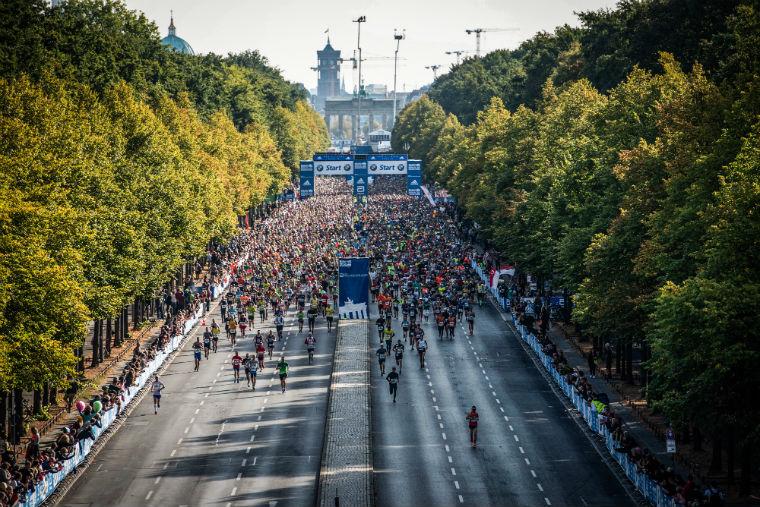 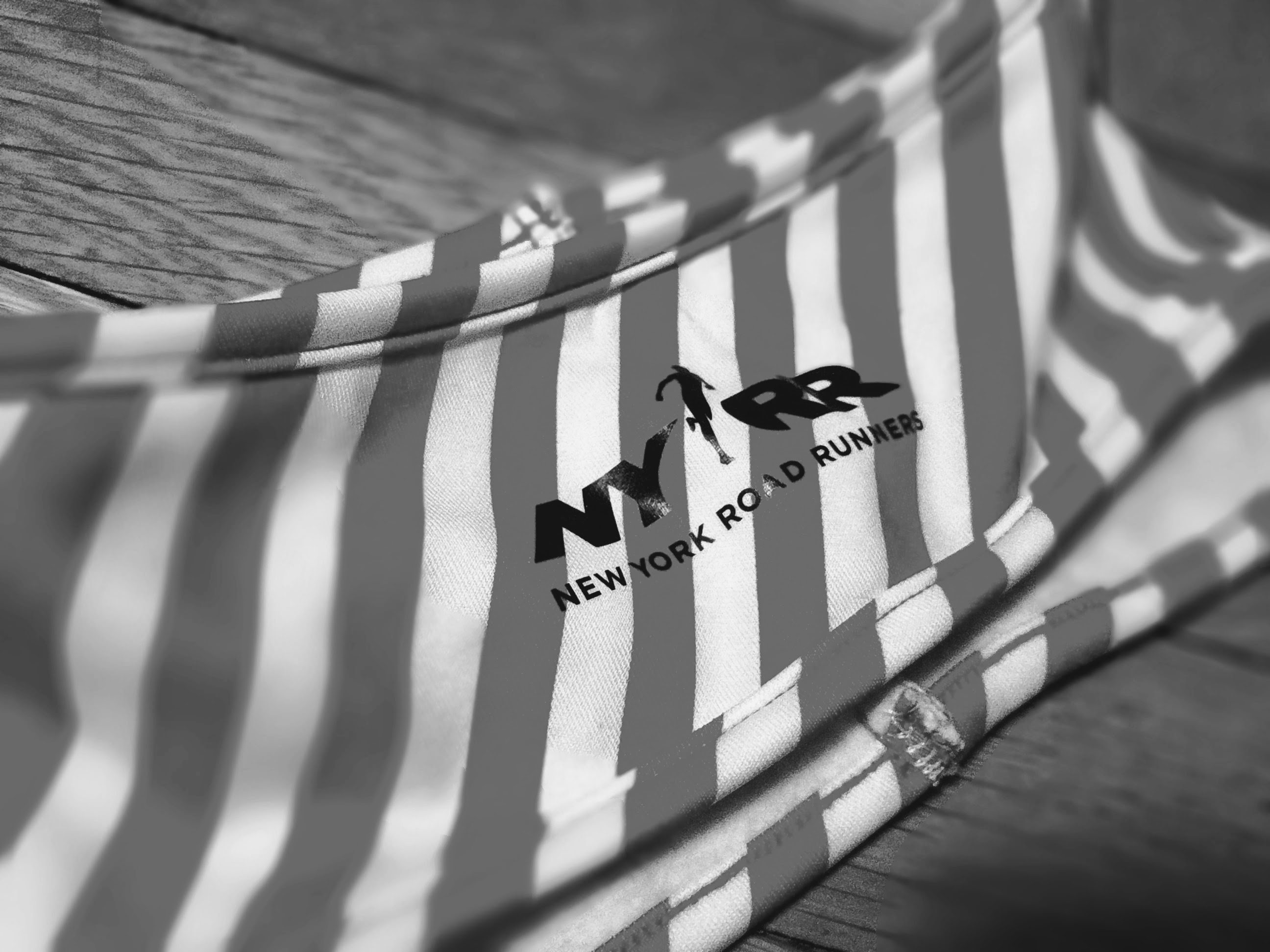 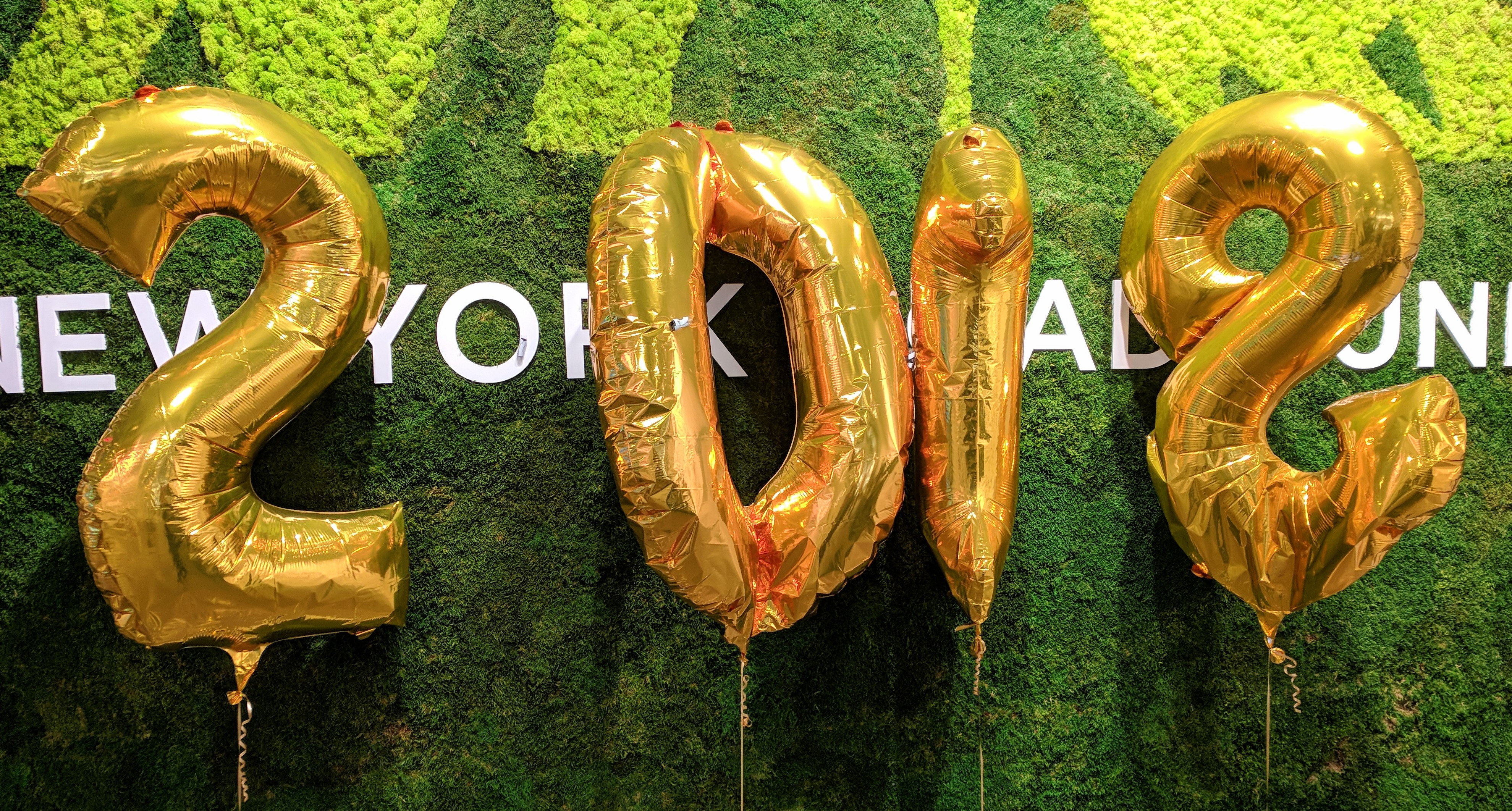